However, with the global pandemics hitting hard, I understood that we will no longer be able to go to our church to record. James Flores advised my to try out Hauptwerk with my MIDI keyboard that I already had at home. I downloaded the trial version, got very excited and started recording manual-only music - all on the basic St Anne's Moseley sample set which is built-in in Hauptwerk V. Hauptwerk seemed like the way to go so I ordered the Advanced version and Velesovo sample set from Sonus Paradisi. That's when I started recording my improvisations and Clavierubung II and III by Johann Ludwig Krebs. Then Ausra joined in in recording Krebs' Clavierubung I a little later.

Here's the obvious problem - I didn't have the pedals. But I already had advanced version of Hauptwerk! Oh well, this can't be avoided, I thought... So without telling Ausra, I knew I couldn't wait and secretly decided to buy what I needed to play and record music with pedals at home. Instead of buying a ready to use, fully functioning digital organ, I wanted to have the flexibility to set up my own customised solution with MIDI keyboards and pedalboards. After looking up some keyboards online, I've settled with Thomann online instrument store which have a great selection of everything I needed plus they offer free shipping. ​So in early March I ordered these items from Thomann (without telling Ausra, of course). The links to the products and banner at the end contain my affiliate links so if you buy through them I get a small commission for recommending them. Thanks in advance! 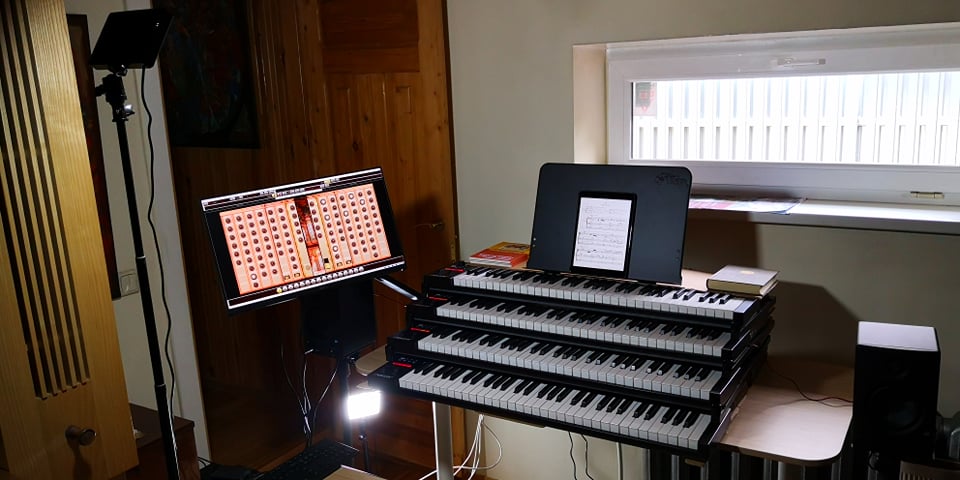 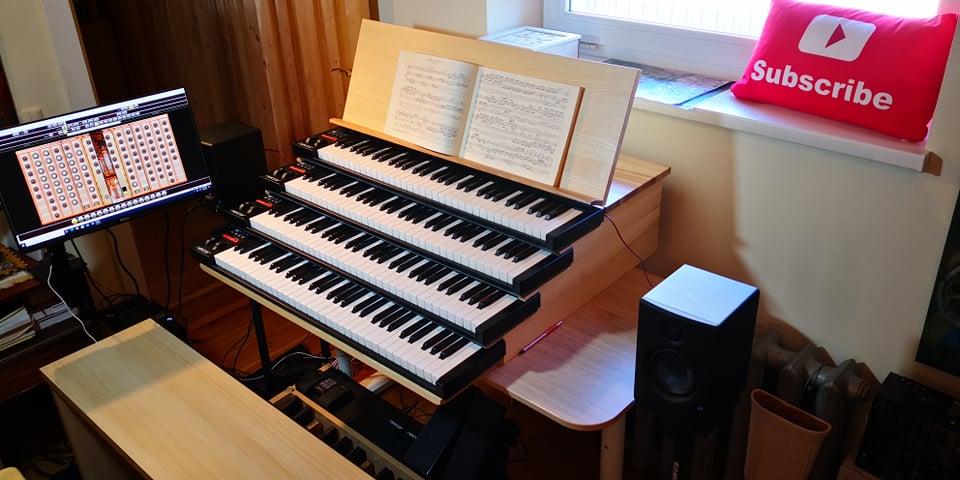 In the summer of 2021 I decided to built my own portable Hauptwerk setup so that I could play in other locations which don't have pipe organs. For this I bought:

It's summer and it's fun to be able to play outside, maybe even on the beach. But carrying a real-sized MIDI keyboard sometimes can be impractical. I've always been curious about how these Roll-Up pianos work so I recently I bought this one:
USB MIDI Roll-Up Piano
Yesterday it was delivered and today I'm trying it out in the garden while playing Schmücke dich, o liebe Seele, Op. 122 No. 5 by Johannes Brahms. Hope you will enjoy the sounds of Hauptwerk Salgareda sample set by Inspired Acoustics! I had to put a plank under the keyboard because it's made out of silicone and on the soft grass it is tedious to play. It took a while since I got used to the touch. It takes a bit of effort to press the keys evenly so that MIDI signal would not break. It's easier to play an early music piece which doesn't require perfect legato touch but I was glad to meet this challenge. Next time Ausra and I go to the beach we will certainly take this little guy with us too. The roll-up piano could be good for practicing on a silent keyboard to build precision in your technique while traveling, provided you don't use too much force with your hands which creates too much tension. 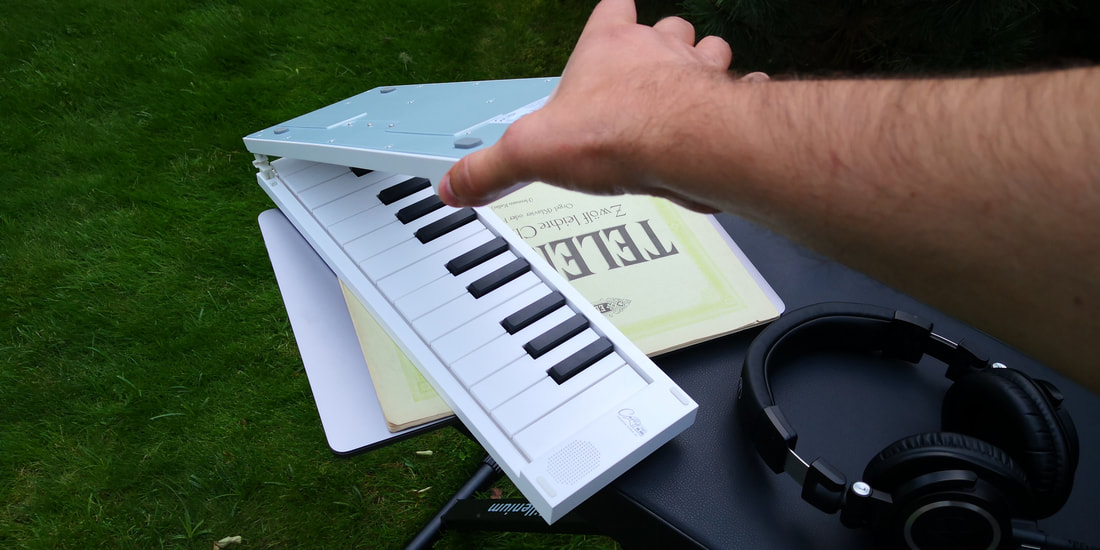 While the roll-up piano is difficult to press the keys evenly and actually it requires quite a bit of force from the fingers which might not be healthy long-term the above foldable 49 note midi keyboard is really easy to play. Yesterday it was delivered and I tested it out on Schmücke dich, o liebe Seele by Georg Philipp Telemann and some manualiter pieces by Leon Boellmann from Heures Mystyques. Both articulated early music and legato romantic music was enjoyable to play as you will see in this Telemann video below. This little keyboard fits in the backpack and I will carry it with me to some visually interesting locations to make some videos. I hope it will be durable enough because it is very light, weighs less than 0.5 kilograms and when folded takes up the size of basically 2 octaves, or a little more than the size of the laptop. The size of the keys is quite similar to that of early keyboards (shorter keys but distance between C to C in an octave is the same as on a modern keyboard). The only thing to keep in mind about this one is that you need to have a hard surface underneath it to avoid folding while playing. In the video below I used 2 planks on this X-shaped stand on which I placed this foldable 49 note midi keyboard. 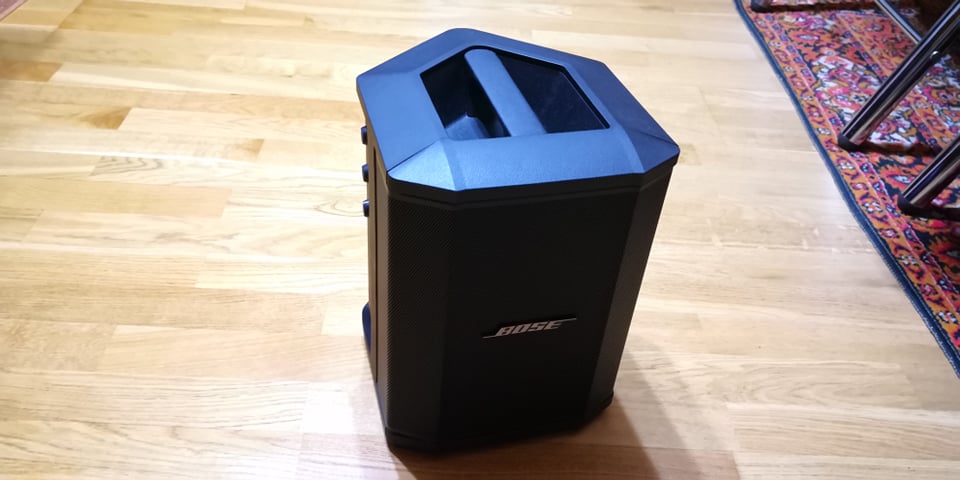 For my portable Hauptwerk setup I use Bose S1 Pro System. I played it in medium sized venues, such as auditoriums, churches, chapels and open air spaces. I'm very happy with the deep, powerful and sonorous sound and of course portability of the speaker which could be connected to the Hauptwerk laptop via Bluetooth and or a mini jack cable. I prefer cable because of some delay with Bluetooth. This PA system has 2 XLR inputs which allows me to connect a mic or two if I need to talk. When I play outdoors I can use it without power outlet. Fully charged battery runs for up to 11 hours. Might even buy one more such speaker for larger venues.

Recording equipment we use at the church

One of the most important aspect when recording organ music at the church is microphone placement. Earlier we used to place the camera without external mic on the organ balcony but the result wasn't ideal - in such videos you could hear only rather direct sound coming from the organ without beautiful blending of the acoustics. After recommendation of our YouTube friend James Flores we started placing audio recording equipment downstairs in couple places - one in the middle of the church and the other - closer to the balcony but still downstairs. The camera would be placed near the organist but muted in the editing process. This way we would get the best of 2 worlds - up-close view of the organist (sometimes even a second camera for the feet) and a nice surround sound from the nave, exactly the way the listeners would hear.

So here is the list of the equipment we use when recording from the church: